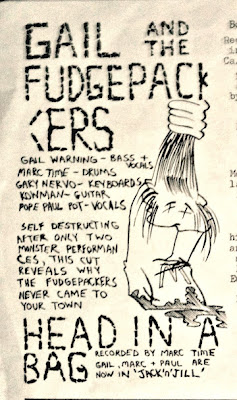 I wanted in on the sharing of obscure music fun, a la the fine sites listed to your right on this page, but my collection is relatively limited and it is gol'dang hard to find something that hasn't already been shared by these dedicated individuals who maintain the blogs and sites I follow. But finally, I think I have found one song, at least, that's not available on the internet - and I'm pleased that it happens to be one of my current favorites.

It's from 1988's The World's In Shreds: Volume 1: East Bay, a freaky little ditty by Gail & The Fudgepackers, called "Head In A Bag." I came across the 7" at the Half-Priced Books in Dallas. Picked it up for $3 plus tax. All the songs on this compilation are fun stuff, but "Head In A Bag" is my personal favorite.
The vocalist for the Fudgepackers, Pope Paul Pot, keeps a little history of his musical exploits for posterity, and this is what he says about "Head In A Bag":


"1985 "Head in a Bag" A surreal romp into the mind of a madman. Story is that there was this guy going around San Francisco telling people that he had a human head in a bag. When he was found, it turned out to be just a very fake head. It's rumored that the guy now teaches paper machie sculpture at the Crucible in Oakland."

Also from Pope Paul, here's a history of Gail and The Fudgepackers.

7/7/2012 UPDATE! Paul Pot does a Wednesday Open Mic night at the Missouri Lounge in Berkeley, CA. In my ongoing effort to just bother people, I'm going to get in touch with Paul and just see what's up. I'll be sure to share the results on CNQ! 1/12/2012 UPDATE! I never contacted Paul Pot. I wonder what he's up to.

Download: Head In A Bag
Posted by Matt Nauseous