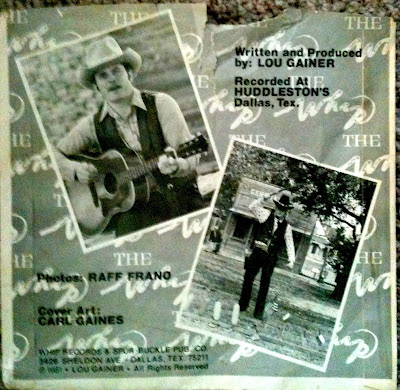 This is the B-side to "Lash LaRue," which is a pretty awesome story-song that features some truly bitchin' whip cracks. Unfortunetly, the A-side is scratched and skips in a couple of different places, otherwise I would certainly feature it. Still, "You're The Oil Slick of My Heart" has its country-ballad moments.

"Lou Gainer" was the pseduonym of Carl Gaines, a Dallas native who billed himself as a "writer-peformer crack-whip artist." A Google search of "Lou Gainer Carl Gaines" will bring you to a list of treatments he copyrighted back in the 70s, one of which was about the Monkees. Pretty cool, man!

This was put out on "The Whip Records," which I'm assuming was Gaines' own label, since he was a crack-whip artist and the address provided for Whip Records & Spur-Buckle Pub. Co. -- 3426 Sheldon Ave. in Dallas -- is somebody's house. This 45" was written and produced by Gaines as Gainer and recorded at Huddleston's in Dallas, in 1981. Looks like Johnny Mathis recorded at Huddleston's back in the late 70s. I really wish I could play y'all Lash LaRue, because those whip-cracks in the song are boss. I borrowed this gem from my in-laws' collection.