The Mark Chapman Experience: "I Want To Be Around" (Booger Records, 1991) 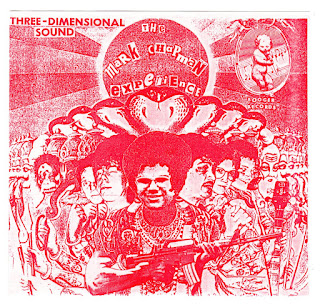 Hello, all you Clean, Nice, Quiet people! I've been on a wonderful, Griswold-esque European honeymoon but I'm glad to be back in hot-ass Texas. Got a ton of stuff to share, including a nice handful of French punk/new wave 45s. But first things first -- some corrections!

Robert from "The" Mark Chapman Experience also gave me the low-down on this 7" and it's some pretty interesting Texas music history, to wit:

Robert says two of the tracks ("Intoxicated" and "I Want To Be Around") were recorded in Dallas, where he and vocalist David Aguilera resided at the time. The other two tracks ("Manny & Kitten" and "Clean & Sober") were recorded in Grapevine (northwest of Dallas) where the remaining two members of the band, Jon Jaworski & Charlotte Arnold, lived. Robert was the recording "engineer" (his quotes) during these sessions. This EP was the first to be released on the Booger Records label, which was founded by Steve Stokes, former proprietor of the Record Gallery on lower Greenville Ave. in Dallas. Booger Records was located in Dallas at the time but eventually moved to Seattle.

According to Robert, Booger Records was founded with the intention of publishing the works of the most incompetent "musicians" (again, his quotes) in North Texas and beyond. I think that's a pretty noble endeavor!

"Out of a total of 300 of those EP's," Robert writes, "probably less than 50 have ever been circulated. The balance, no doubt, moldering in self-storage lockers in Dallas, TX, Canton, GA. and Seattle, WA."

The first time I shared "I Want to Be Around," I referred to The Mark Chapman Experience as an "arty freak-out" and tagged it as "avant-noise." Robert says any kind of post-modern conceit was not the intent of the band at the time.

"Perhaps sub-garage would be a more appropriate tag," Robert writes, "The band was genuinely dedicated to producing the most gawd-awful, crapolla imaginable. Sometimes we exceeded that goal. The instrumentation roster rotated. The general rule being that if you were even marginally proficient on one instrument, you would be "encouraged" to play another, on which you had no technical proficiency whatsoever."

Again, I think that's a pretty noble endeavor on their part. I told Robert I think the Mark Chapman Experience nicely illustrates what I've suspected about post-modern art for quite some time -- that the difference between post-modern art and "gawd-awful crapolla" is tenuous at best, and usually it's really hard to tell the difference between the two.

Nevertheless, to me, "I Want To Be Around" is more fun on another listen at the correct speed. Well worth the $3 I paid for it from Half-Price Books in Dallas.

Finally, not be confusing, but here's a link to the other "Thee" Mark Chapman Experience, who do "Experimental Post Ambient Quasi-Industrial Noise Rock" and are from the Languedoc-Roussillon region in France (which, coincidentally, is where the wife and I spent part of the honeymoon we just got back from!):