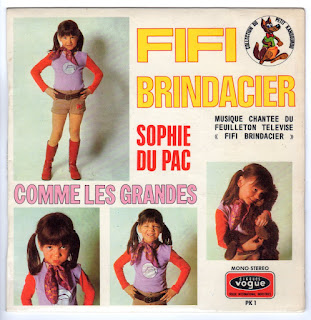 Check this out. Sophie Du Pac may have starred in a French television show called "Fifi Brindacier" in the late 60s/early 70s, but I can't find any reference to it on l'internets. Fifi Brindacier (Brindacier translates as "Steelwisps") is the French version of Pipi Longstockings, that much is for sure.

Little Sophie was in a movie called "Cry of the Cormorans," according to IMDB.

Other than that, all I could come up with is this little gem was arranged by French conductor, arranger and saxophonist Armand Migiani, who also has a Decca release called Sex-O-Rama under his belt. The words to Fifi were written by Astrid Lindgren, the creator of Pipi Longstocking. This French music site has the words to Fifi Brindacier. The Google translation is pretty funny. "Have you seen my monkey?" and "Must trust Fifi!" stand out. The B-Side, "Comme Les Grandes," was written by a Bob du Pac and Andre Tissot. I assume Bob was little Sophie's pop. I think the B-side is a better jam.

You can get this 45, put out by Vogue International Industries, on the internet, but be warned it comes at a price! Which is good news for me if I ever want to sell it. Groove Collector and CD and LP both have it at 49 Euros, Gemm.com has it at $126 in VG+(!). I got this for 2 or 3 Euros!