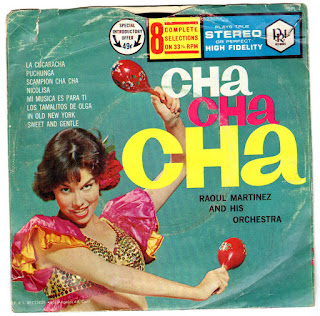 No wikipedia entry on Raoul Martinez. Couldn't find any bio info through a Google search either.

This eight song (!) 45" was put out by Precision Radiation Instruments, Inc. Back in 2003, the guys over at Both Sides Now Publications wrote a great little history of PRI. According to the piece, PRI started out selling cheap geiger counters back in the 1950s when there was apparently an Alaskan "uranium rush" -- who knew? -- and then when the bottom fell out of that weird little market, the company merged with record company Tops Records.

Fascinating music history on all these Both Sides Now links, so I highly recommend a look-see at that site after you're done here. The PRI/Tops/Mayfair discographies they provide look like really cool sounds with neat cheesecake covers. I'll have to keep my eye out for the label from now on when I'm digging.

Here's the discogs entries for the coolest of the bunch -- If the Bomb Drops and Voodoo.

Meanwhile the LP (L 1659) of "Cha Cha Cha," featuring a young Mary Tyler Moore on the cover and released in 1959, is readily available on the Internet, and comes in both black and yellow vinyl. But Google couldn't help me find the EP I have (pictured in the scan above, featuring the same shot from the LP of Mary Tyler Moore as "Mary Tyler Morales"). I have this 45" in my possesion courtesy of my lovely wife's collection, and I assume she snagged it from her parents' collection when she moved to college.

The EP is not listed on discogs, on 45cat, nor in Both Sides Nows' PRI discography, which ends at a special issue SPL-1 - "8 Full Big Band Tunes," and they're not sure the date that one was put out, looks like probably 1960. This one I have is SPL-4, so I assume it was put out later, as some kind of repackaging of the full-length LP from '59.

Here's what eBay has in way of Raoul Martinez sound, just "Cha Cha Cha" along with a couple of other LPs, all put out by Tops. Interesting to note there's also a Raoul Martinez CD, a 1998 release put out by Pickwick, the company that bought out PRI/Tops/Mayfair in the 60s.

So, presented for your studied reference, three tracks from this excellent, and apparently hard to find, 45". Vamos a bailar!