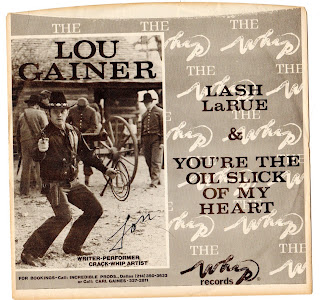 I'd featured the flip to this, "You're The Oil Slick of My Heart," back in June of '12, and would've posted "Lash LaRue" as well but my copy of it had scratches that made the A side skip pretty bad. Luckily, Lou Gaines (who changed his stage name from Lou Gainer once being accepted into the American Guild of Variety Artists), who wrote and performed the song, saw the post, contacted me, and was nice enough to send me a clean copy to feature on the CNQ blog!

On top of being a songwriter, Lou is also a professional bull whip artist, and you get to hear some cool whip cracks on this track. The horns and backing vocals on this track are also great - this is good stuff, made all the better by the awesome whip crack effects!

As for the flip, "You're The Oil Slick of My Heart," it's seeing some fresh action itself. George Jones' former backup band, The Jones Boys Band, has covered "You're The Oil Slick of My Heart" on their recent album, "The Legend Continues." You can check out their airplaydirect.com page and listen to the song, which is the second song from the bottom of the track list. If you're into country and steel guitars, I really recommend giving the whole album a listen on that page, I really enjoyed it.

Up next: more of my Record Holder Series, some early 80s new wave from a compilation I got on the cheap, and, as always, all that other stuff I talk about, to which I never get around!