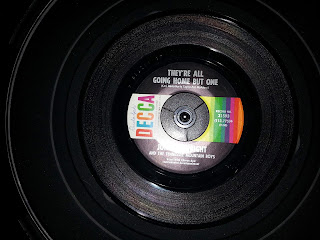 Wright's big hit was "Hello Vietnam," a pro-Vietnam War song that topped the Billboard country charts in 1965, a time when anti-war sentiment across America was like, freaking out all the squares. This is the B-Side to "Walkin', Talkin', Cryin', Barely Beatin' Broken Heart," a tune Roger Miller and Justin Tubb co-wrote, which was on the "Hello Vietnam" album, but was released as a single in '64 by Decca and charted on the Billboard country charts at 22. It's Record No. 31593 and was written by Karl Davis, Hary Taylor, and Pat McAdory. It says on the 45 label that Wright is backed up by the Tennessee Mountain Boys, but it looks like the Tennessee Mountain Boys were just Wright and his singing partner, Jack Anglin, who, according to his Wikipedia entry, died in a car crash on the way to Patsy Cline's funeral in 1963. The entry also says Anglin was married to Kitty Wells' sister, Louise. I wonder if that's Kitty or Louise doing backing vocals on this track.

The song was also covered by Porter Wagoner, and I can't find any mention of this 45 on Discogs or 45cat, and it's not on Youtube or the first page of a Google search. I found one copy for sale on ebay, where somebody has a promotional copy for sale for $10 and change. The only other reference to the 45 that I found is on Worldcat, and they list their copy as a "promotional copy" as well.

So while what I have probably isn't really rare or super special (or even, in my opinion, all that good of a song), I do love finding and sharing something for educational and historical purposes that isn't readily available on the first page of a Google search yet.

The song is about a guy who goes to the city with his brothers, and then when it's time to go visit mama back home in Georgie he's in jail for some unspecified reason. Don't do the crime if you can't do the time, buddy.

Found this and a few other 45s yesterday at a store called B4 in Deep Ellum, in Dallas. Cool store, I hope to be back soon!

And here's the Tubbs/Miller A-side, it's a cool song: