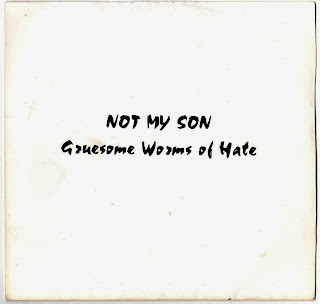 Not My Son was a punk band: Carol Steele on bass/vocals, Tim King on guitar, and Rich Hahn on drums. I don't think it's the same Tim King who's in the metal band Soil. According to Discogs, this "Gruesome Worms of Hate" 7" had two versions, a reggie black vinyl and a red vinyl. I picked up the red vinyl for $5 at Half-Priced Books.

It was recorded by Martin Feveyear, who I'd never heard of before. But, according to his wiki entry, he has produced and worked on a ton of albums, many of which are big name bands. After you're done here, check out Feveyear's Jupiter Studios. Cool stuff!

GWoH was recorded in Seattle and released on Rejection Records, which I can't find much information on, but I did Google Street View the address listed on the back of the 45. Looks like it got gentrified after Rejection Records moved out.

Discogs sez "Gruesome Worms of Hate" was recorded back in 1994. As far as I can tell, this was their only release.

Here's the one Youtube video I could find, them covering ABBA's "SOS":

Lead singer/bass player/lady boss Carol Steele seems to have disappeared, not an easy feat in this digital age. She put out a zine in the mid-90s called Now Meet Satan, which is rad, moved from Seattle to either Austin or San Antonio, and then her trail goes cold. I couldn't find any info re: Tim King or Rich Hahn either, assuming the Tim King on GWoH is not the same Tim King of Soil fame. So, life's mysteries. If anybody knows what became of these righteous punkers, let Clean, Nice, Quiet know. Meanwhile, here's the two songs off the B side of "Gruesome Worms of Hate!"

Here's a pic of the A side: 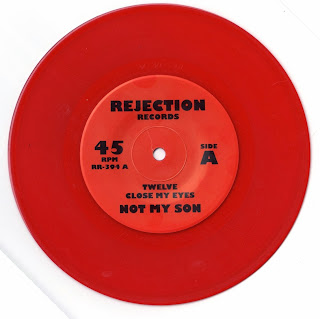