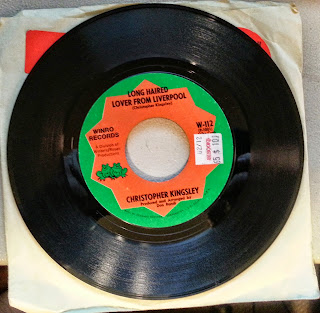 I couldn't find this already online, and when that happens I just get flat out giddy.

It's a 7" single of Christopher Kingsley singing "Long-Haired Lover From Liverpool," a song he wrote and recorded in 1969, that didn't do too much except that (according to the Long-Haired Lover from Liverpool wiki page, linked above) four years later it turned little nine year old Jimmy Osmond, youngest of the Osmond clan, into the youngest dude ever to hit number one on the U.K. pop charts. The world screamed for change. It got little Jimmy Osmond.

As mentioned, the song was written by Kingsley. It was produced and arranged by Don Randi, who, according to Wikipedia, was a major contributor to Phil Spector's "Wall of Sound," played piano on "These Boots Are Made For Walkin'" and the Beach Boys' "Good Vibrations," and has played with the likes of Sarah Vaughan, Frank Zappa, Quincy Jones, Cannonball Adderly, and Linda Ronstadt to name a few.

Over to the side of my 45's label, with the issue # (W-112) and the song lengths, it says "Mike Curb Music Corp." I'm not sure what that means Curb did for the album - put up money? Distribute it? I've never thought about what that signifies before. I might look into it.

Mike Curb was Lt. Governor under Jerry Brown from 1979 to '83. He was also president of MGM Records, his own label Curb Records, which Hank III is on, aaaand he owns a NASCAR car. It is good to be Mike Curb.

Curb's band, the Mike Curb Congregation, recorded their own version of Long-Haired Lover from Liverpool in 1970, as a B-side for the song Sweet Gingerbread Man, which was from the MGM film "The Magic Garden Of Stanley Sweetheart," which is just hanging out on Youtube with 37 thumbs up and 6 thumbs down.

The record was released on Winro Records, "A Division of Winters/Rosen Productions." The only pictures/catalog of this 7" I could find online were on Ebay where someone is selling it for $7, and on 45cat, but both are the promo version and not what I have (pictured above), which I assume was actually released somewhere or another.

I couldn't find much on Kingsley himself, but I did find a couple of Youtube posts from a couple of years ago, featuring him singing and playing guitar on a couch. Pretty cool!

Here he is rocking out at 512 Studios down in Austin:

According to Wikipedia, "Long-Haired Lover From Liverpool" is owned by Richard Kaye Publishing Company, but there's no citation. I did a brief Google search for the company but came up short.

I paid a buck for this, picked it up at the 1/2 Priced in Dallas. The flip to Long-Haired Lover, a John Denver-esque ballad called "Pursuit of Destiny," is heavy, man. Dig it.

This record was a real rabbit-hole of trivia and fun facts, and Long-Haired Lover is a fun song. I hope you enjoy it and I hope Mr. Kingsley is doing well. Check out this freak show though: