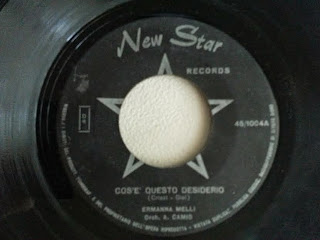 New Star Records operated in Milan, Italy from the 1960s to the 80s. Ermanna Melli's "Avevi Ragione" ("You Were Right") is the B-side to "Cos'e' Questo Desiderio" ("What's This Desire"). Both tracks were written by Crisci-Gial, and I can't find any info on that songwriting team. Both tracks were produced by maestro Angelo Camis, who also founded the label.

I can't find much on Ermanna Melli herself, and this seems to be her only work for New Star - maybe her only release period. Per the site Music & Memory, a backing band called The Whole may assist her on this record. This ebay listing has a picture of the original sleeve of the 45.

Like I said, both tracks on this 45 were written by a team named Crisci-Gial. I did find a poem, "Mary Was The Poetess," on the site poetrysoup. It's copyright 2009 by Andrew Crisci, whom I believe is Mary Crisci's brother. In the poem he talks about how Mary wrote the song "Cos'e Questo Desiderio" when she was 18, and it was recorded by Ermanna Melli, "from the city of Forli." The poem is a very pretty tribute to his sister, you should check it out.

Both the A and B sides of this 45 are enjoyable 60s pop. Kind of reminds of me of French ye-ye. Someone on Youtube beat me to the punch with the A-side (posted below), but the B-side, to my knowledge, has yet to be featured on the Internets.

I forget where I picked this up; either at B4 or at a Half-Priced Books. I think it was mixed in with a stack of Latin 45s, if memory serves.