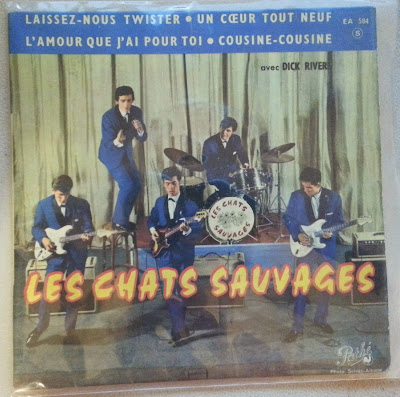 This 45 was a birthday present from my sister. Thanks, sis!

Per Wikipedia, Les Chats Sauvages (that's The Wild Cats to you and me, Rus) operated from '61 to '64. They were originally fronted by French singer/songwriter Dick Rivers, who left the band to pursue his solo career in '62. According to Wikipedia, Rivers has continued to record and perform up until at least 2011. Per Wikipedia and Discogs, Rivers and Les Chats Sauvages helped bring rock'n'roll to France in the early 60s, and, in February of '61, they caused a riot at a gig in Paris with Vince Taylor. Super-cool.

Pathé Records released the record. Per Discogs, Pathé was active in the U.S. market from the late 1800s until the 30s. They continued to operate in Europe, especially in France, until the 1980s. Neat history.

The single, Laissez-Nous Twister, is a wild, rockabilly, Elvisy, French language cover of Sam Cooke's Twistin' the Night Away. It is just the most, man.

The other song, Cousine-Cousine, is the last song on the 4 song EP. The back of the sleeve says it was written by "P. Saka - J.P. et H. Bourtayre." I don't understand the J.P. part but Saka and Bourtayre, I believe, wrote a few songs for Dick Rivers during his career. Anyway, the other two songs are great, and it was hard to decide which song besides the single to pick. Check out Rivers' delivery in Cousine-Cousine. I think he wants to tongue your ear.

Thanks again, sis! Also, I apologize about my janky pics, where you can see my shadow hovering above the record with my phone. I'm in between scanners.