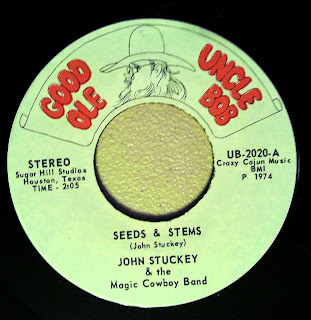 John Stuckey, who wrote both these tracks, had a radio show on KPFT in Houston in the 70s, and also was into demolition derbys. Awesome. The B-side to this 45, "Scares the Hell Out of Me," has been featured on the Dr. Demento Show a couple of times, once in 1975 and once in 2009. As near as I can tell, neither of these tracks are previously available on the Internet, so this is the type of real deal cool stuff CNQ breathes for. Stuckey's son got in contact with me tonight and said his dad was 6'8", and went on to become a renowned tattoo artist, and both Stuckey and Uncle Bob (the label is called Good Ole Uncle Bob) were tattooed dudes. That's pretty cool. Sadly, John Stuckey is no longer with us, having passed away in 2003.

So this is UB-2020, copyright Crazy Cajun Music BMI. It was recorded at the famous Sugar Hill Studios in Houston. Stuckey's son thinks both were produced by the Crazy Cajun himself, Huey P. Meaux. Seems reasonable to me that they would be.

These songs are great. Topical, timeless. The A side, Seeds & Stems:

If the embedded player above doesn't work for you, try this: Seeds & Stems

Scares the Hell Out of Me:

If the embedded player above doesn't work for you, try this: Scares the Hell Out of Me