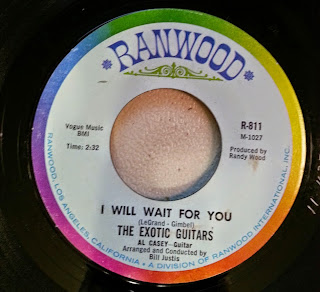 Al Casey is a famed session musician originally from Phoenix, Arizona. He played with Lee Hazlewood, Sanford Clark, played guitar on Jody Reynolds' awesome Endless Sleep, wrote Duane Eddy's Ramrod, and was an original member of The Wrecking Crew, the famous group of studio musicians in 1960s Los Angeles. Casey's guitar can be heard on Pet Sounds, Nancy Sinatra's "These Boots Are Made for Walkin'," and a ton of other popular music from the 1960s and beyond. He was also a member of the band on the Dean Martin Show.

Casey had a few hits of his own in the early 60s with the Al Casey Combo, but sometime around 1968 he was approached by Randy Wood to arrange and record some popular songs on guitar in a bid to attract a younger audience to Wood's new easy listening label, Ranwood. Wood was the founder and President of Dot Records, and had partnered with Lawrence Welk to form Ranwood Records after both left Dot when its parent company, Paramount Pictures, was sold to another company.

Thus was born The Exotic Guitars, which released several albums and singles through the late 60s and into the 1970s.

I Will Wait For You, was on the first Exotic Guitars self-titled album, and is the B-side to the single, a cover of Blueberry Hill, from the same LP. I Will Wait For You is the English version of a song from a French musical called The Umbrellas of Cherbourg. The music was composed by famous French composer Michel Legrand, and the English lyrics are by American lyricist Norman Gimbel, who wrote Sway, The Girl From Impenema, Killing Me Softly with His Song, among others.

Casey puts a 60s surf spin on I Will Wait For You, and it's the most, man. The most.

The 45 label credits Al Casey on guitar, but says I Will Wait For You and the A-side were both arranged and conducted by Bill Justis, he of Raunchy fame.

Al Casey passed away back in 2006. A Youtuber has posted the whole self-titled Exotic Guitars album, but still, here's I Will Wait For You.

I Will Wait For You

If the embedded player above doesn't work for you, try this: I Will Wait For You