Two Spookernatural Tracks From the CNQ Vinyl Vault of Horrors! 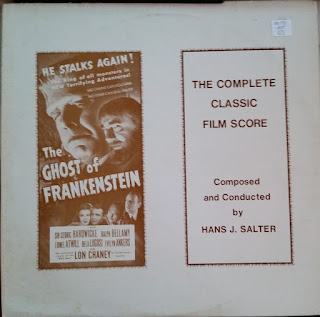 Composer Hans J. Salter was born in Vienna in 1896, studied music there and had a career in Berlin and Vienna before coming to America after the Nazis came to power in Europe. Hired by Universal in 1937, Salter made a career of scoring films of various genres, but horror movies became his particular forte, having scored more Universal horror flicks during their Golden Age than anyone else. "The Ghost of Frankenstein" is his first major one, but he also did The Creature From the Black Lagoon, The Incredible Shrinking Man, The Mole People, and many others.

1942's "The Ghost of Frankenstein" starred Lon Chaney Jr. as the Monster, and Bela Lugosi as Ygor. As of this writing, Bela Lugosi remains dead.

This track, "Monster Kidnaps Child," is from Side B of a limited edition LP, "The Ghost of Frankenstein: The Complete Classic Film Score Composed and Conducted by Hans J. Salter," put out in 1979 and produced in association with Salter Music Publishing Company by Tony Thomas Productions of Burbank, CA. All of the selections are taken from the original acetate recordings in the composer's library. What a Halloween treat! I snagged it at Josey Records. So, beware the Ghost of Frankenstein -- he stalks again! No chains can hold him! No tomb can seal him in! (Because he's a ghost.)

If the embedded player above doesn't work for you, try this: "Monster Kidnaps Child" by Hans J. Salter 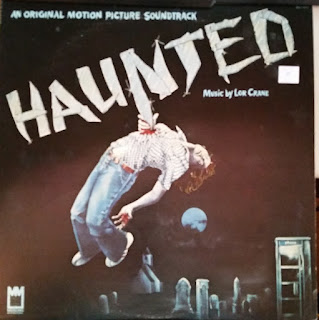 Next up is another LP I found at Josey Records, the original motion picture soundtrack for a West German horror movie from 1977 called Haunted. The movie starred Virginia Mayo and Aldo Ray (best known for his tough guy roles in the 1960s), who, according to IMDB trivia section on the movie, was hard to work with during filming because he was drunk a lot.

I'd never heard of the movie before, but the cover caught my eye so I picked it up. The first side is four original songs, the last of which is an 8:29 track of pure disco hell. The second side is mostly incidental music, one of which, "The Chase," is legitimately spooky and I thought about featuring it here, but the first song from side A, "Indian Woman" (revenge is her only friend!), is too cheesy and enjoyable not to share. It effectively relates the premise of the movie, which is what I look for in songs featured in movie soundtracks.

"Indian Woman" is sung by Billy Vera, who wrote "At This Moment" and the theme song for "King of Queens," and composed, arranged and conducted by Lor Crane, who wrote an episode of The Patty Duke Show and some Shindig! episodes. Be glad I'm not sharing that 8 and a half minute long disco track; it's too horrifying, even for Halloween!

If the embedded player above doesn't work for you, try this: "Indian Woman"