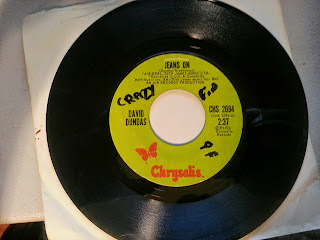 Loyal CNQers (both of you) may remember I originally started this blog to post songs from 7" vinyl that I could not find elsewhere on the Internet. That gave me an excuse to start a 7" collection, and although I've kept on buying 45s, I haven't posted near as many of them as I should, opting instead for the easy sharing of new music I like courtesy Bandcamp and Soundcloud. Late last year I made an attempt to get back into posting material from 45s with my Record Holder Series, but after a strong start that petered out and I was back to lazily sharing embeds of new tunes.

Anyway, the other night I got out all the 45s I haven't done anything with yet, and put them in a big stack on my desk (it's not /that/ many, maybe 60-70 records). With them staring at me, and not tucked away in a tub with our 12" records, I hope to make a dent in these before I get lazy again. Also, I think I got my levels good with Audacity now so the mp3 below should be in the Goldilocks zone of listenability. Alright, enough jibber jabber -- here's the skinny on tonight's tracks:

According to Wikipedia, Lord David Dundas (b. 1945) is an English musician, actor, and also scores television and films. He's the 3rd son of the Marquis of Zetland, which sounds like some Lord of the Rings stuff but I guess it's real. "Jeans On" was featured in a television commercial for Brutus Jeans and the Wikipedia article is unclear which came first, the ad jingle or the song. I think it was the song but I'm not sure. At any rate, the commercial definetly made the song popular enough so that it became a single, peaking at #3 on the UK charts and #17 on the U.S. Billboard Hot 100. It's a catchy pop tune, if that's your thing. If catchy 70s pop/ad jingles/songs sampled by Fatboy Slim are not your thing, the song may still get stuck in your head, and make you hate your blue jeans and/or the act of putting them on. My apologies if that occurs after listening to "Jeans On."

Brutus Jeans is famous for making a shirt that was popular in the 60s called a "trimfit."

"Sleepy Serena" is the flip and I couldn't find it on the Internet. So, for educational and historical purposes only, here it is. It's a funky pop jam that has a little bit of Bee-Gees and a little bit of Beatles lurking behind it, I think. It's alright but certainly not as catchy "Jeans On."

Here's the Brutus Jeans ad, as well as the album version of "Jeans On," courtesy Youtube:

Meanwhile, back in the 21st century, Sydney's Simo Soo has three new tracks available on Bandcamp called TEARZZZZZZ EP. It's super-cool glitchy, noisey hip-hop, so check it out if that's what you're into.