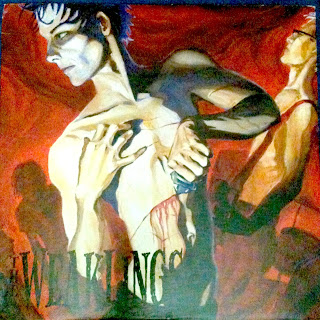 From 1998, off a self-titled blue vinyl LP put out by Junk Records (who operated out of Cypress, CA, but no longer have a web presence) comes a rockin' Stones cover by this Portland, Oregon band. I bought this at ye old Half-Price Books in Dallas sometime last year. If memory serves I got it for $10.

When I first bought this, I did a little research and found that the lead singer, Bradly Battin, liked to cut himself on stage back in the Weaklings' heyday (see album cover), and, more recently, Battin had been awarded something like "Best Person to Drink With" in some Portland Free Weekly reader's poll. However, I can now find nothing regarding either of those two factoids, and I may be spreading awful lies.

If you're interested, the bass player for this album, one Jeff Larson, has a Myspace page for his project, Lucky Thirteens, which features a little EP of garage punk. Looks like all the trax date from 1996. Kinda cool.

I'd originally posted this one last night but something was messed up with the playback AND I caught the end of the previous song in the track, rookie mistake. So here it is again. I think I did it right this time.