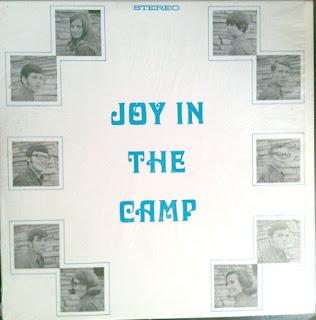 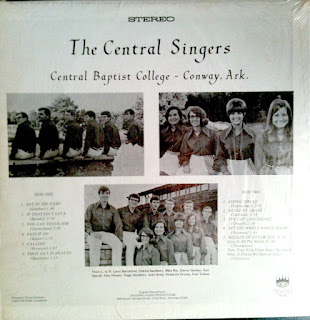 I want to do more than just punk stuff on Clean, Nice, Quiet, while keeping the jams relatively obscure, and this little gospel ditty is about as obscure and not-punk as it gets. The "Joy In The Camp" LP is by The Central Singers of Central Baptist College in Conway, Arkansas. I'm guessing it was made in the late '60s based on the ladies' hairdos and the guys' sideburns. The title track, the one I'm sharing, was written by gospel singer/songwriter Bill Gaither. It was released by Queen City Album, Inc., a company based in Cincinnati, and originally recorded by Jaggars Audio Productions out of Little Rock. Steve Jaggars' studio also apparently recorded some Arkansas psych bands back then as well, but sold the studio in 1973 to Clyde Snider. Cool history.

Anyway, I like this tune. It's upbeat with a keen folk guitar, and to me has a bit of a Manson Family vibe, but I might just be projecting. There is so much frickin' joy in da camp, y'all! These guys look like they knew how to party, too -- check out the back cover. As for the ladies, I'll take the one with the glasses (low self-esteem).

Joy In The Camp