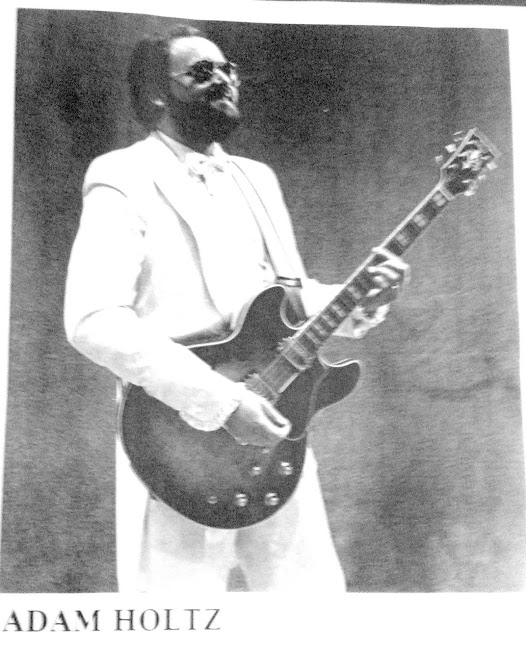 Last month I shared Adam Holtz's 1980 single "Party Hardy," and a few weeks later was thrilled to see the man himself had contacted me -- and not to tell me to remove the post!

Instead, he wanted to send me some of his new stuff, as he's still alive and kicking and making music. I got his 12 song CD in the mail today, all songs written and performed by Adam, recorded on a four track home portastudio between 1998-2005.

Adam grew up in Lafayette, Indiana, and moved to Arlington, Texas in 1976, at the age of 16. He won the Terry Award in 1981, People's Choice Entertainer Of The Year and 1984 Best Single Act in the Metroplex. He performed at Billy Bob's on the main stage in 1982 for the Terry Awards show doing The Everly Brother's "Let It Be Me."

As for the CD he shared with me, the ballads and mellow tracks are melodic and pretty, the rockers are bloozy and funky, and it's all catchy, honest, polished for being recorded on a four track, and adult without being stodgy. A very nice 70s/80s classic rock feel throughout the 12 tracks. Adam also uses a drum machine in his songs, something to which you hardcore punkers might turn up a pierced septum -- but I think it gives the tracks a "bedroom recording" aesthetic that I, personally, very much enjoy.

Adam's range - developed over a 34 year stint as a writer and performer - is impressive in itself. He touches on gospel ("Thanks Be To God"), country ("Their Love Lives Forever"), psychedelica ("Need You're Lovin', Right Now"), grunge ("You're The One") and even a mild form of hair metal ("Now That's A Livin'," which he should have sold to Mötley Crüe). Listening to the 12 song sampler, I was reminded of Santana, ZZ Top, and even Todd Rundgren. The majority of the tracks are about love, and you know there's nothing wrong with that.

The last track Adam put on the CD for me, "What I Should Be Doin'," is a funny, touching song about a musician who knows how good he is and wonders why he's still punching a time card. All 12 tracks are endearing and highly listenable. Adam gets extra points for dropping his g's at the end of all his gerunds on the song titles. I grew up in Louisiana and Arkansas and don't know how to pronounce "ing." When I moved to the Metroplex a few years ago, the city-folk here here looked at me like I spoke Greek. They still do.

Adam's fave groups include "the Beatles, Kings X, Bachman Turner Overdrive, Badfinger, Boston, Jellyfish, and most guitar bands from the 70s-80s." Of the bands listed, I'd never heard of Jellyfish, which is cool.

He's currently listening to Wilson Phillips' "Dedicated" and The Beach Boys' "That's Why God Made the Radio."