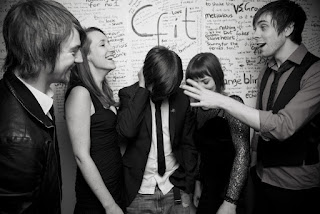 Cfit is a seven piece rock outfit from Dublin, Ireland that Ireland's Hot Press has compared to Interpol and the National. Upon a couple of listens to the tracks on their available for free album Triage, I'd say that's on the mark, as the overall feel of the album is a little melancholy (without being overly saccharine or mopey), but what wowed me about the tunes on Triage was something the gang over at mp3hugger.com put best:

"The wide-eyed appeal is in the song writing which veers between classic song structure to rampant experimentation."

With that in mind, I'd say fans of Broken Social Scene and Los Campensinos! will be well pleased with the sounds on this album. I know I was. The lead singer has an Ian Curtis thing going on with his voice that is also pleasing to the ear.

Check out these two awesome tracks from Cfit, then go over to their bandcamp page and, even though it's free, shell out ten euros for the album. They deserve it!