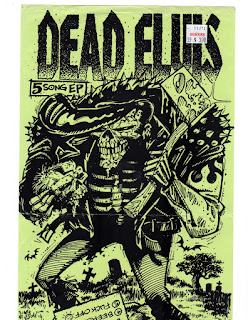 For fans of fun punk rock, I think this Dead Elvis EP (put out by Revolt Records, but see below) is definetly something you want taking up space on your computer. I got in contact with the guy who did the righteous artwork for the sleeve, awesome as heck cartoonist Derek Yaniger, and it turns out he was also the drummer for Dead Elvis, under the moniker Squirmy Rooter. Derek was nice enough to share some beer soaked memories about DE and some cool pics and art for the band as well. 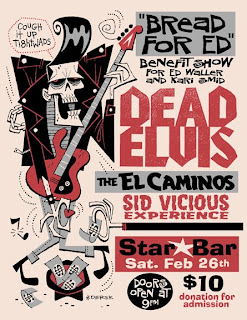 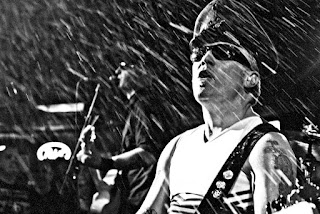 Here's what Derek said about Dead Elvis, who operated in Atlanta in the late 80s and early 90s: "Them's was crazy days! If my brain had not fermented in cheap beer for 8 years I could probably lay some memories on ya".........We produced the 7" ourselves so Revolt was just somethin' we came up with.........I don't think we put out any other wax under the Revolt name, but I'd have to ask Jet (guitarist and lead singer)......We called our particiular brand of noise "Drunk Rock".....we spent more time creating T-shirts and stickers and posters than we did practicing....We were really just into getting smashed, chasing punk rock girls and pickin fights with the other bands in town......We did manage to get a few nice gigs....we opened for Danzig, Murphy's Law, Social Distortion and the Ramones.....We were about the only true non-skinhead punk band in Atlanta in those days.....We were known for our wild shows where we spit beer on the crowds, lit stink bombs and ripped up stuffed animals, trashing every club we played......good times."

Righteous rock history. I've said it before, and I'll say it again -- I love this hobby. I was hoping some of the other band members (Jet Terror on vox/guitar, Chris Mills on guitar, Ernie Danzig on bass (catfish and tuna) and Squirmy himself on the stix) would get in contact with me too before I posted this, but they didn't and that's cool, I'm just happy to have the info Derek shared above, and his permission to share this raucous EP. My favorites are "Elvis Had A Big Dick" and "Beercore." Really fun stuff. Don't forget to check out Derek Yaniger's awesome website, featuring his art and such for sale. It's serious pro work -- Derek has his own art book called Wildsville and has worked for Cartoon Network and Marvel Comics! BAD ASS. 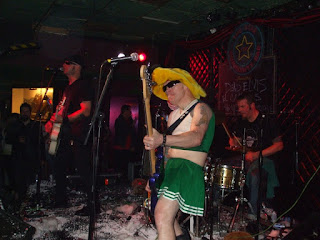 So, recorded at R.W. Studios in Norcross, GA, engineered by Rick Ware and "hairstyles by Hiney Boy Hair Studio," without further ado, check out Dead Elvis!

Elvis Had A Big Dick

Download:Elvis Had A Big Dick 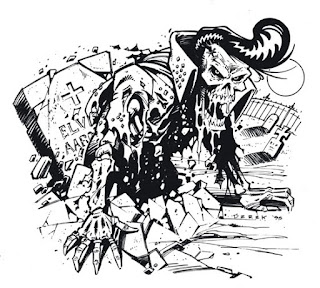