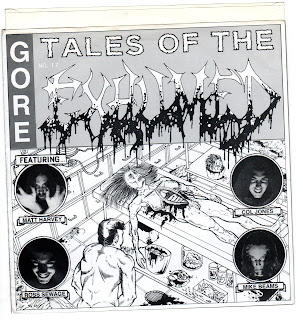 Exhumed is an American death metal band, formed in 1990. I bugged founding member Matt Harvey to see if he minded if I posted this track and he did not mind. "Gory Melonoma" is from a 7" split called Pray for War/Tales of the Exhumed, which Exhumed did with Swedish grindcore act Retaliation, put out by an Italian label called Headfucker. I like the EC Comics-inspired cover art for Tales of the Exhumed, and that's the main reason I picked it up for $3.00 over at the Half-Price Books in Dallas.

Regarding the two Exhumed songs on the split, Metal Archives notes:

"Recorded during the same session as Totally Fucking Dead. Originally planned to be included on Gore Metal, but ended up not being allowed to, as both were written entirely by Ross Sewage."

I couldn't find any current contact info for Retaliation, but I did accidentally contact a German Technical Death Metal band on Facebook also called Retaliation. I think it's solid metal, check it out after you're done here.