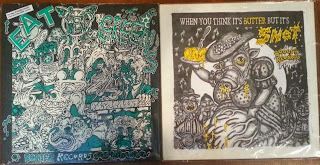 Fans of noise, trashy punk, art brut/outsider art, joke songs and obscure sound in general should bend over backwards to obtain a copy each of these two awesome compilation LPs. It turns out you don't have to bend too far (unless that's what you're into), as "Eat Yer Greens" and "When You Think It's Butter But It's Snot" are both still available for $7.50 + post, a pittance compared to just how much wild crazy sound is on these albums. Not to mention the colored vinyl - green for "Eat Yer Greens," and booger white with flecks of yellow for "When You Think It's Butter..."

True and total freaks can get these two fine specimens courtesy Rev. Stevie Fever, AKA Rat Soup, the proprietor of Booger Records (who also put out this Mark Chapman Experience 7" back in '91) by emailing him: revfever at paypal dot com. Let him know what you want and he'll send it to you. Each album is $7.50 plus post, which includes a pro-made LP mailer and extra packing inside.

"Eat Yr Greens" comes with a free comic. Sorry for the lame phone pic that doesn't do the album art (done by a cat whose name was once Earwig but who now goes by Plague Doctor) on either of these justice; my scanner ain't big enuff for LPs and I ain't no shutterbug.

I'm pretty sure these comps are ethnomusical projects of the highest caliber. As the album artwork on "Eat Yer Greens" sez: "When you want the worst...pick the best...pick a BOOGER!"

Jesus Got Paid by Mitey Head

Nightmare of Darkness by Jethro Tilton

These two gems are from 2001's "When You Think It's Butter But It's Snot." You should see the beautiful colored white and yellow vinyl on this one:

There's so much other choice stuff on these albums, from nearly-unlistenable noise (a good thing or a bad thing, depending on your asthetics - I like it, my wife doesn't, for instance) to some funny/rockin' punk songs and an oddball cover of Gary Numan's Cars, I'm truly blown away by the scope of all of this. The back cover of "When You Think It's Butter..." advises

Sage advice. Rev. Fever sez another Booger Records comp is in the works, and he's still accepting submissions -- if you think you've got what it takes to be on a Booger comp, let the Rev. know: revfever at paypal dot com.

Also, be sure to check out Skult, Rev. Fever's recent industrial/experimental jams.