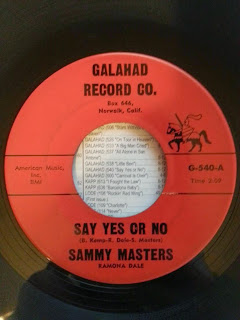 I've had a couple of reports of my mp3 embeds not playing, so I'm trying out some new code tonight. If it won't play on your device, it should say so, and provide you with a link to download the song instead. If you've got a moment, leave me a note and let me know how this new code treats you. Thanks!

Also, I know it's janky to just take a picture of my record with my cell phone. You can see my shadow over the vinyl - embarrassing. I need a new scanner. It's on my list.

Sammy Masters was a rockabilly cat who recorded in the 50s and 60s. He wrote Turn the Cards Slowly, a minor hit for Patsy Cline. He was on The Jack Benny Show and Town Hall Party in the 50s. His song Rockin' Red Wing was a regional hit in L.A., and made it to #64 on the Billboard Hot 100 in 1960. Another of his songs, Who Can I Count On, was recorded by Willie Nelson, Bobby Darin, and Wayne Newton.

Masters' music career seems to have stalled, and he worked in TV production in the 60s and 70s. I dunno what he did in the 80s and early 90s, but in 1997 he got to tour Europe and Japan when a rockabilly revival was going on there. That's cool. After that, I guess he went back to doing his normal thing. He died at age 82 in March, 2013.

Praguefrank's country discography also has a good discography for Masters, and rocky52.net has a nice bio, discography, and some pics of Masters' 45s.

Rockabilly Hall of Fame has a good article about the man, as does BigVJamboree.

Neither discogs nor 45cat have a listing for this 45, and I didn't find either song available for listening on a Google search. These two tracks were released on Galahad Record Co., which was Masters' own label independent label. The address on the 45 is Box 656, Norwalk, California.

Say Yes Or No was written by B. Kemp-R. Dale-S. Masters. I'm not sure who B. Kemp was, but R. Dale must be Ramona Dale, who is also listed as singing backup on both of these tracks. I dunno who Ramona Dale is otherwise, though. When Fools Get Together was written by Sammy Masters only. Rockin' Records lists this 45 as being $8-12 in near mint condition. Mine's a little scratched on one side but it plays fine - I picked it up for $2.98 at The Record Parlour in L.A.

Those links talking about Masters are interesting and each is worth reading. These two songs are fair enough 60s country - both are a little downbeat. I prefer the B-side but don't I always? As always, these songs are featured on CNQ strictly for educational and historical purposes. I'm not making any money doing this, and I hope I'm not pulling any bread out of mouths when I share these. If anything, a little exposure never hurt any artist. But the mp3s are gonna come down in a month or so, when I have to make room in my online cabinet for new stuff. So listen while you can.

Say Yes Or No:

When Fools Get Together: