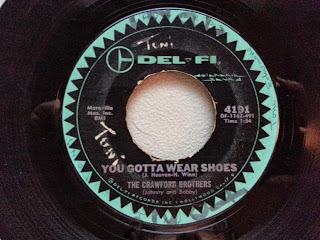 We just got back from a vacation to Los Angeles. This 45, Good Buddies/You Gotta Have Shoes, has some cool L.A. and Hollywood history attached to it. I picked it up for $1.98 at The Record Parlour.

Good Buddies was written by Carole King and Jerry Gofffin. "You Gotta Wear Shoes," the flip, was written by Hal Winn and Joseph Hooven, the founders of the Hollywood labels Double Shot Records and Whiz Records. Double-Shot put out the Count Five's Psychotic Reaction. This 45 was released in '62 on Del-Fi Records, another Hollywood label. Del-Fi was famous for signing Ritchie Valens, but a lot of cool acts were on it.

L.A. native Johnny Crawford was Del-Fi's biggest chart topper. The guy was the kid in TV's The Rifleman and one of the original Mouseketeers. His older brother, Robert Crawford Jr., listed on this 45 as Bobby, was an actor as well, but apparently they both recorded together and separately. Good Buddies is an okay Carole King song, someone has posted it to Youtube already. You Gotta Wear Shoes is...it is what it is, a relic of a pop song, too saccharin and too bland for my tastes. But I didn't see it on Youtube or another blog, and you Quieteers (both of you) know how much I love history, record label obscura, and sharing sound that hasn't been heard on the Internet yet. So for educational purposes --

You Gotta Wear Shoes by The Crawford Brothers: 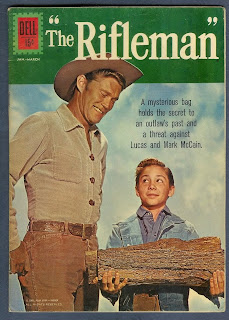