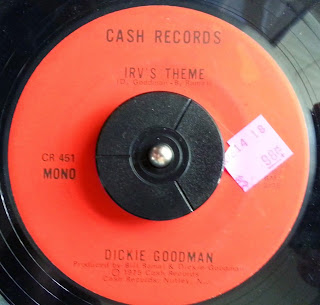 "Richard Dorian "Dickie" Goodman (April 19, 1934 – November 6, 1989) was an American music and record producer born in Brooklyn, New York. He is best known for inventing and using the technique of the "break-in", an early precursor to sampling, that used brief clips of popular records and songs to "answer" comedic questions posed by voice actors on his novelty records. He also wrote and produced some original material, most often heard on the "b-side" of his break-in records."

Irv's Theme is one of those b-sides, written by Goodman and Bill Ramal. It's the flip for Mr. Jaws and is a neat little instrumental. Per Wikipedia's Mr. Jaws entry:

Goodman has an impressive discography. He committed suicide in 1989, age 55.

The comments section at 45cat has some interesting facts about the pressing of this record, a couple of different theories on why Goodman chose "Cash Records" as the label name (one repeating the story from Wikipedia, that Goodman named the label Cash because that's what he wanted the record company to make the check out to), and why there are so many different variants; plus pics of all (?) the variants. Neat stuff. I scored my mono copy (pictured above) for 98 cents at The Record Parlour in L.A.