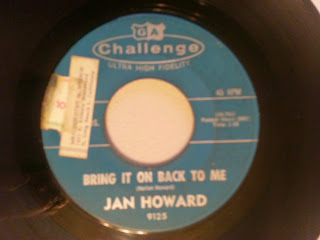 Jan Howard was born Lula Grace Johnson to a poor farming couple on March 13, 1932, in West Plains, Missouri. She was one of eight kids and was married at the age of 15, with three sons before she was twenty. She divorced twice before moving to L.A. in 1955. There she met her future husband, songwriter Harlan Howard, and after that her career took off. Despite her success, she's had a rough go at life - the bio on her website has this to say about Mrs. Howard's hard road to becoming one of the "Grand Ole Ladies" of the Grand Ole Opry:

"Jan is the survivor of a difficult life, but has always made it clear that she doesn't want pity. Her saga - which includes miscarriages, marital abuse, bigamy, poverty, war, suicide, cheating, divorce, thievery, depression, and mental collapse - has only made her stronger."

Dang! Bring It On Back To Me was the flip to the non-charting My Baby's In Berlin, both written by Harlan Howard. Released in 1961, on Los Angeles-based label Challenge Records. Challenge Records was co-founded by Gene Autry! Their biggest hit was in '58, the Champs' Tequila.

Bring It On Home isn't on Youtube, and the 7" isn't listed on Discogs or 45cat. I found it listed on Howard's own website's discography page, and from there I got the date. Youtube poster Jruus1 says My Baby's In Berlin is only available as a 45 single, and hasn't been on any of Jan's albums. I like this song. For educational purposes only, here's:

Jan Howard - Bring It On Home: