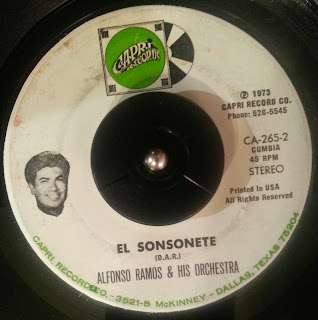 Per the Austin Chronicle's Musicians Register:

El Sonsonete was the B-side to El Silencio de la Noche. Both songs were on the 1973 Capri Records album, La Unica Mujer. This 45 is catalog #CA-265. The address on the 45 label is in McKinney, Texas. Cool.

Listen to Alfonso Ramos and His Orchestra play El Sonsonete:

If the embedded player above doesn't work for you, try this link: El Sonsonete

Besides the McKinney address on the label, I couldn't find any info about Capri except that they also put out some Latin psych-funk back in '72 from Tony Hernandez & The Latin Liners. The Hernandez LP is called La Voz Encantadora. Back in '12, the guys at latinfunk.org posted the track featured in the Youtube video below, as well as the song Jo Tex, plus some biographical info about Hernandez. Gotta find me some Tony Hernandez.