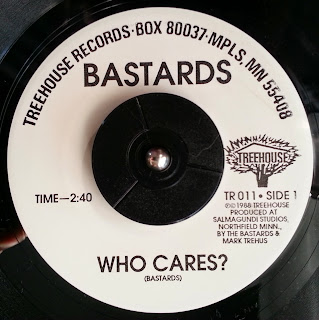 I picked this punk 45 up at Half-Price Books in Dallas for five bucks. It was one of the first ones I bought when I started my little 45 collection, back in '12. I had never heard of Bastards before, I just liked the cover. But today is the first time I've actually listened to this record. I am a spoiled child, buying toys and then not playing with them. Well, I finally got around to it, anyway.

Hailing from Minnesota, Bastards were Anthony Martin on bass and vocals, Joachim Breuer on guitar and vocals, and Tommy Rey on drums, though it looks like a cat named Dave Wieland played drums on Who Cares and Shit for Brains. Bastards rocked something one Youtube commenter called "hatecore" and another called "dirt rock" in the late 80s and early 90s. Looks like they released just three 7"s, one EP, and an album called Monticello that was produced by pre-Nirvana Butch Vig (There's also a CD that combines Monticello and the EP).

This 45 and Monticello were both put out on Treehouse Records, which also released some stuff by big names like Pagans, Babes In Toyland, and Unsane.

It was produced at Salmagundi Studios, in Northfield, MN, by the band and Mark Trehaus, the owner of the Treehouse label. Back in 2007, the sadly defunct music blog The Last Days of Man on Earth wrote a post that talked a little about Treehouse, and weirdly enough, in the comments section, there's a comment from TODAY on it, posted not 30 minutes before this writing, from the very same Mark Trehaus of Treehouse Records. The Joe he's referring to is the writer of The Last Days of Man on Earth. Here's Trehaus' comment:

highwatereverywhere says: October 18, 2014 at 6:56 pm just met joe in my store today, and he hipped me to his site. not much to say about my old treehouse label, except that i don’t know what the hell i was thinking at the time. who in their right mind would think it would be a healthy thing to try and stay clean while starting a label with a guy i met in a drug treatment center, and then begin signing up a bunch of bands largely full of (and surrounded by) ungrateful, dysfunctional, juvenile brats…talk about a recipe for disaster! and a disaster it was.

to correct joe: treehouse records (the label) was formed out of oar folkjokeopus, the store i managed for 17 years prior to taking it over and renaming the store treehouse records (after much urging) in 2001. the label was ahead of its time, as opposed to being some sorta amphetamine reptile wannabee…check the timelines if you think i’m spewin’ sour grapes. anyway, amphetamine reptile ended up getting better ink, more money, and a few other scale-tipping factors which caused them to ultimately reap the notoriety and financial paydays. i’m not bitter about it; i have my sanity intact, which i almost lost about 20 years ago, and i wouldn’t want to be any of those guys for all the gold in china.

How serendipitous is that!? I wonder if the guys in Bastards were some of those brats...

So anyway, back to this 45 - these songs were also on their EP, You Didn't Give A Damn About The Exploding Man Because You Killed Him, which was released on Glitterhouse outta Germany. 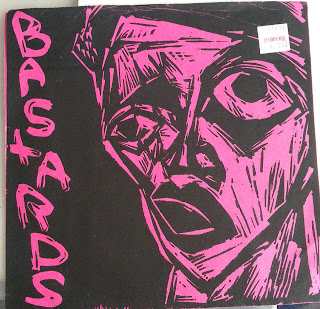 There are two releases of this 7". The first was a limited silk-screened, hand-numbered edition of 200, with art by Fred Hagstrom. I'll be. The second, the one I have, is a repro of that original, in pink and black.

The band went on to do other stuff. Anthony Martin founded Boomba Records in Germany, released some Turbonegro albums over there. Joachim Breuer went on to form Janitor Joe with Hole bassist Kristen Pfaff. If the guys in Bastards are out there, this stuff y'all were doing a quarter of a century ago was awesome. Glad I finally listened to this 45. Today I found a vinyl copy of Monticello on ebay and ordered it immediately. It's post-punk, kinda bluesy, kinda metal. I dig it the most.

A lot of the songs off Monticello and the EP are available on Youtube, but I couldn't find Who Cares anywhere, so I thought I'd share it. Bastards seems to have a bit of a cult following, as is evidenced by various Youtube comments on the tracks shared on there. One guy says Bastards played a show with frozen mice hanging from their instruments. Here's a cool 2004 review of Monticello.

...and here's another way to download Who Cares by Bastards.

A Youtuber beat me to the punch with the flip side, Shit for Brains:

Here's a playlist of all the Bastards I could find on Youtube: