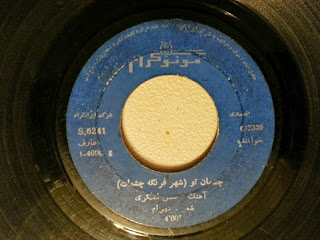 Today was my first visit to Shake Rag Music in Dallas. Among a whole bunch of other cool stuff the wife and I picked up, I found two 45s with labels written in Arabic. They were pretty scratched but for 75 cents a pop I could afford to take a chance on them. Bottom feedin'!

So I snagged these two 45s, each a different label, but both have text only in Arabic. Wild! The song presented below is the only one that plays without a skip, even after I cleaned them up. I still think they're neat.

UPDATE: I had guessed this was North African from the 1960s, but I was wrong. Thanks to the cool folks on the facebook page I follow, The Art of the 45 RPM Label, I am told this is Iranian pop by a performer named Aref Arefkia, on the Monogram label. Aref was a popular performer in Iran in the 60s and 70s, and left the country after the Revolution in '79. He lived in London for a while and now lives in Los Angeles. He's still performing after 50 years, check out his web page. I'm still not sure what the name of the song is, but I'll update once I figure it out.