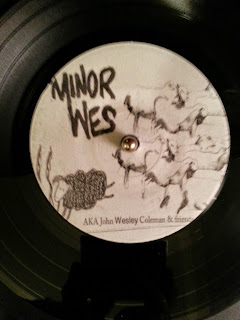 Blogger has this little widget where you can let people vote on the post, and I gave the options boss/mas o menos/eats it. I'm not sure what I was thinking when I gave the Internet the option to tell me my post eats it. Oh well. I think it's more punk rock to take the negative criticism than to remove the option.

Austin rocker John Wesley Coleman was born in Irving, Texas on Thanksgiving Day, 1975, and has been making music for over 20 years now. I discovered him via a split 7" he did with fellow Austinites The Crack Pipes on Sick Thoughts, released around 2009, but The Crack Pipes song is from an album they did in 2003.

I purchased my copy at the flagship Half-Price Books in Dallas for four bucks - it was actually one of the first seven inches I bought for the blog, back a couple of years ago. I just kept buying 45s like a nut and this one got buried.

So Coleman's side of that 7" is called "Minor Wes," and it's two and a half covers of Minor Threat songs and one original, Shut Up & Love Her. The covers, as far as I can tell, are not hitherto available on the Internet, so here they are, for a limited time, and for education/historical purposes only:

If the embedded player above doesn't work for you, try this: Guilty of Being...Wes/Minor Wes"

If the embedded player above doesn't work for you, try this: "Straight" Edge

So thru the magic of the Internet I got to ask Coleman about the recording of this 7" and received some rad insight into some Texas music history.

JWC says Minor Wes was recorded at the same studio, Shape Have Fangs, and with the same band (The Fleshlights) Coleman used on the album Steal My Mind, which is on Google Play and worth checking out for sure. For Minor Wes, basically they had a kegger and invited their friends to lovingly record seven Minor Threat songs with them, as well as that original number -- Shut Up & Love Her, linked above.

Coleman has another band called The Golden Boys, and they're cool too:

Finally, as a special treat for all you CNQrs (both of you), here's an unreleased track of Coleman's "Strange Life," recorded by Andrew McCalla, down in Austin, back in February '13:

If the embedded player above doesn't work for you, try this: Strange Life