These three new, original Christmas songs courtesy CNQ fave Adam Holtz are from Volume 18 of his copyrighted material. Click the title to listen and download: 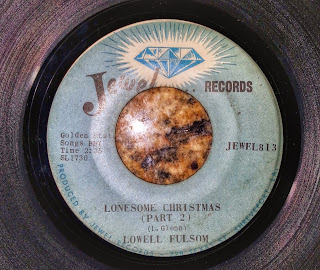 Lowell Fulson, per Wikipedia, was, "after T-Bone Walker, the most important figure in West Coast blues in the 1940s and 1950s." I'm always humbled by the amount of music history I do not know. I bought it because I pick up any 45 I find that's from a Shreveport label. Lonesome Christmas Parts 1 and 2 were originally recorded by Fulson for Swing Time Records back in 1950. It charted at #7 on the R&B charts. Both songs were written by fellow West Coast Blues pioneer Lloyd Glenn. These updated, funkier/bluesier/cooler versions below are from 1970, on Shreveport's Jewel Records (Jewel 813). Fulson recorded these as Lowell Fulsom. Fulson died in 1999, age 77, the father of four and grandfather of thirteen. Glenn died in 1985, age 76. As far as I can tell, neither of these versions of Lonesome Christmas Parts 1 and 2 are otherwise available on the Internerts:

I was digging through our 45s for Christmasy singles and/or b-sides. Here's a couple I found in Mrs. CNQ's stack that were already on Youtube...the Dolly song is from 1982's The Best Little Whorehouse In Texas soundtrack: