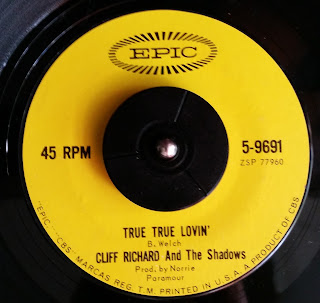 It's been too long since I dipped into my 45 collection. Also I figured out how to record better, I think:

According to his Wikipedia entry, Sir Cliff Richard turns 75 this October 14, has sold more than 250 million records worldwide, and is the third-top-selling singles artist in UK Chart history, behind the Beatles and Elvis Presley. How is it I have never heard of this cat, nor ever heard a single song by him? Richard's career has spanned more than 50 years, but he never found much success in the States, which I assume is the answer to my question.

Richard and his band the Shadows were marketed as rebellious rock'n'rollers and were apparently top dogs in the UK pop/rock scene of the late 50s/early 60s, before the Beatles showed up. According to Wikipedia, John Lennon called their 1958 hit "Move It" the first British rock'n'roll record.

The Shadows split in '68 but Richard continued to record. He finally had a hit in the U.S. with "Devil Woman" in 1976. "Devil Woman" is a pretty cool song, with a chorus that ends with "she's gonna get you from behind." Is the Devil Woman going to sodomize me? Geeze, I will stay away from that Devil Woman then. October is approaching so put "Devil Woman" on your Halloween mix for sure.

Richard got religious, got knighted, the Shadows reunited in 2008; there was a sexual assault allegation against Richard after the Jimmy Savile scandal, but no charges were filed and as of June 2015 the investigation has been dropped. Looks like he might've just got caught up in a witch hunt.

"True True Lovin'" was also the B-Side for "Constantly," which doesn't look like it was released in the States. This 45 was put out stateside by Epic in 1964, same year as the Beatles' first world tour. You can certainly hear the Beatles influence on "True True Lovin'." It's a fun, pacey rarity written by Bruce Welch of the Shadows and produced by Norrie Paramor.

As always, this track is presented strictly for educational purposes, and won't be up for very long.

"True True Lovin'" by Cliff Richard and the Shadows

If the above doesn't work for you, try clicking this: "True True Lovin'" by Cliff Richard and the Shadows
Posted by Matt Nauseous