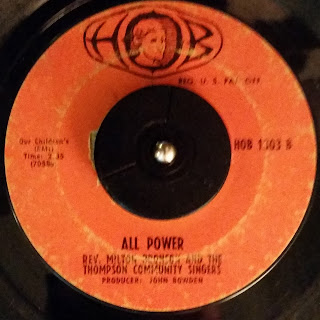 Reverend Milton Bronson (1929-1997) was a Grammy award winning gospel musician and a pastor in Chicago. There's a post office branch in Austin, Chicago named after him.

Bronson's Wikipedia page says he released his first album in 1988, but his Discogs page shows he and the Thompson Community Singers were recording since the early 1970s.

This 45, "I'll Trade A Lifetime" b/w "All Power," doesn't have a date but judging by it's label number, HOB-1303, and where that would fall in the HOB catalog listing on Discogs, I think this was released sometime around 1971 or '72. Both songs are from the album named "I'll Trade A Lifetime."

The label that put out Bronson's 70s work, HOB, released religious recordings from 1959 up to 1999, according to Discogs data. HOB was a subsidiary of Scepter Records, which was founded and ran by New Jersey housewife Florence Greenberg, who put out a lot of hits by the Shirelles ("I Met Him On A Sunday," "Tonight's The Night," "Will You Love Me Tomorrow," etc.).

On my copy of this 45, the A side skips, but someone's already put "I'll Trade A Lifetime" on Youtube. Youtube comments on that page reveal the names of a few of the "Tommies," as the Thompson Community Singers were called -- Maggie Bell, Betty Jean Plummer, Mary Jean Adams, and Otis Williams. Apparently Maggie Bell was the lead singer on "I'll Trade A Lifetime."

Both "I'll Trade A Lifetime," and the flip side presented here, "All Power," are great, stirring gospel tracks. I apologize for the hiss and cracks in my recording of "All Power," I cleaned the record the best I could.

Click here to listen if the two options above do not work for you: "All Power"