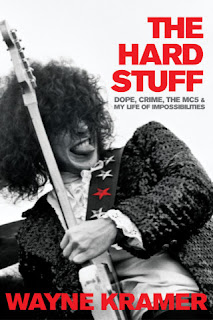 Loyal followers of CNQ (don't laugh, there's three or four, at least) know I'm not a critic or a reviewer -- as I frequently point out, I just share music I like here on the blog and on the podcast, and occasionally gab about this or that. I don't have anything against music criticism or reviewers. Being a critic's just not my bag is all. That being said, when I was contacted by Da Capo Press to review Wayne Kramer's new autobiography, I was like A) why is Da Capo slumming it with me, and B) hey, free book. So I got in contact with them and they were nice enough to send me an advance copy.

I was shamefully ignorant about Kramer, and the MC5. As a kid, reading SPIN and Rolling Stone in the early 90s, I'd read about the MC5 here and there, but never heard an album and all I knew was they were "proto-punk" and political, like Rage Against the Machine.

I remember seeing Jennifer Aniston in an MC5 shirt on an episode of Friends ("The One with the Lottery," back in 2003), and thinking, "I don't think that Rachael would be into that band." It was probably after that I sought out and listened to the song "Kick Out the Jams" (more than likely I downloaded it on LimeWire), and thought it was cool enough, but I have no memory of listening to anything else by them.

Fast forward to July 27 2018 when I received the book, right before I was going out of town on vacation to camp, hike, and drink in the Sawtooth Mountains in Idaho with my old college buddies. I had a lot of time to read and was able to finish the book in record time for me.

It helped that Kramer has an insightful, thoughtful, and conversational tone. Ranging from the first riot the MC5 ever played, to the type of soup he disliked as a kid (Campbell's Tomato Soup with rice added), to his life of hard drinking, drugging, and time in prison, he's a sharp, funny, sarcastic, introspective and progressive guy, and seems a reliable-enough narrator. His wry sense of humor and honesty shows up early in a particularly weird but humorous recounting of his first sexual experience that cracked me up, even though, technically, a ten year old Wayne was molested by his 16 year old babysitter. But, different times.

In 1965, when Dennis Thompson and Michael Davis joined Kramer, Fred Smith, and Rob Tyner, they got their hair and distortion levels right and the MC5 started in earnest with "Dope, Rock'n'Roll, and Fucking In the Streets" as their battlecry. Kramer was 19 and 20 when the MC5 hit their high water mark a couple of years later. He shares fond and not so fond memories and insightful thoughts about the 1967 Detroit Riots, the White Panther Party, how he avoided going to Vietnam, and the usually fun (sex, drugs, and rocking out) but sometimes not-so-fun (raids, arrests, angry radicals, and COINTELLPRO) chaos that seemed to follow the MC5 wherever they went.

After the MC5 broke up, Kramer began a downward spiral into a career as a drug and drink addicted criminal. His life was still chaotic, as it had been in the band, but the fun was eventually completely replaced by the sordid daily routine of addiction and the constant threat of violence that a criminal lifestyle engenders.

"Oh, man, Wayne, why are you doing this to yourself?" was my refrain through most of the book. Kramer's life story is one of almost uninterrupted self-sabotage. It gets grim as Kramer hits low point after low point, struggling with his drug and alcohol dependencies. But there are peaks amidst all the valleys. The occasions when Kramer rises above his addiction and gets to play great shows or work with other musicians he respects and admires are a joy to read, because he clearly enjoyed it so much. And he has a dry wit and observational sense of humor that helps balance the depressing parts, so at no point does he get so maudlin that it becomes difficult or a bore to read.

The Hard Stuff is part celebration of 1960s counter-culture in the way Fear and Loathing in Las Vegas is, and part warning against the dangers of heroin (and heavy drinking/hard drug use in general), in the way Burrough's Junky and Naked Lunch are. It begins as a rock'n'roll coming-of-age in the '60s story, then becomes an addict's tale of degradation, crime and consequence, self-sabotage and eventual self-realization and atonement. The title of the book has multiple meanings. The Hard Stuff is certainly the sex, drugs, and rock'n'roll, as well as his criminal enterprises and time in prison (hard time); but the hardest stuff of all was Kramer's decades long struggle to beat addiction, face who he was, and become the human being he wanted to be.

I teared up on the plane as I finished the book; it was some moving shit. Of course, I was reading and getting emotional after four days of high altitude camping, some intense (for me) hiking in the mountains, and heavy drinking with my buddies, and I had been drinking off and on since before I got on the plane that morning. But still, The Hard Stuff touched me in a very direct and personal way.

There was a lot about Kramer's life with which I directly identified. Like me, his childhood was spent enjoying comic books, sci-fi, rock music, and wondering about girls. Like me, he rejected Christian superstition and started to drink and party as a teenager. And these past several years, in my thirties and early forties, I've been struggling with my own drinking. Reading Kramer's story was as inspirational for me as it was entertaining.

As his bandmates and friends passed away, marriages and relationships ended, time and hard living took its toll on his mind and body. After decades of addiction, at least two ODs if I remember correctly from the book, and against some pretty heavy odds, Kramer seems to have come out of the woods sober, with a respect for life, and an understanding of his own ego, and what drove him to punish himself all those years. The Hard Stuff is a good read and should be regarded as an important first-hand account of a crucial moment in rock'n'roll and music history, as well as an instructional and testimonial for anyone struggling with addiction or self-destructive behavior.

On the plane and in the car ride out to the campsite, I rocked those three albums, Kick Out The Jams, Back In The USA, and High Time. It's good stuff, and I'm baffled why I never got into the MC5 before. If you haven't, go check out those three albums. The song Sister Anne, written by Fred Smith, is particularly bad ass. And definitely go buy The Hard Stuff when it comes out, August 14, 2018.

Da Capo was nice enough to allow me to do a giveaway for a hardcover copy of the book. Like and follow the CNQ Facebook page for details on that.

The T.A.M.I. Show was a big inspiration for teenage Wayne Kramer:


The Clash wrote this song about Kramer, and "Jail Guitar Doors USA" is also the name of the organization he founded with his wife and Billy Bragg that provides instruments, workshops, and prison concerts across the U.S.