Before I get into today's sounds, a quick note on Croatia's own Doomtown Records, who were featured in yesterday's post. They're also a distro, and here at their Discogs Marketplace Store, you can check out their wares -- a super selection of punk and hardcore seven inches, lps and eps from the U.S. and Europe. Here's there's distro list, current as of 6/22/12, which gives nice descriptions for the items they carry.

Scrambled Channels is one Aaron Aldridge from Tulsa, Oklahoma. When he's not slinging books and comics at the flea, he's writing and recording awesome little lo-fi sci-rock ditties like the three featured here. He uses a Fender Stratocaster, a Korg X-3, Boss drums, Boss recorder, and found sound.

I'd go on about how he's carrying on in the footsteps of '90s lo-fi acts like Guided By Voices, Pavement, zzzzzz -- sorry, I just put myself to sleep. Nobody wants to hear me pontificate - enjoy the tunes, and go over to Big A's bandcamp site and buy an album or three! He says it's okay to drop him a line too, if you'd like: don dot hogleone at gmail dot com.

Several years ago, when we were both living and drinking in Fayetteville, Arkansas, I called up Aaron and asked him what the basic chords were for rock'n'roll songs. I wrote down what he said and for some reason I held on to that scrap of paper. 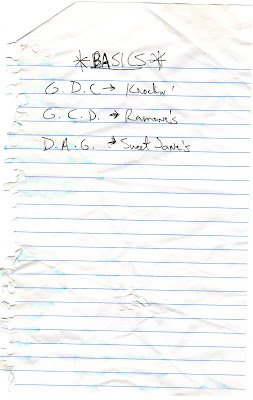