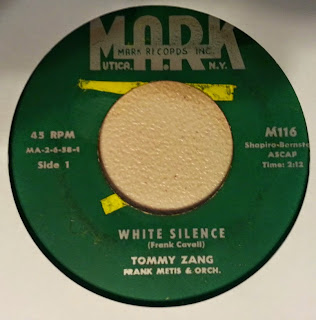 Some googling didn't uncover anything about Tommy Zang, except he recorded for a label called Mark in the late 50s and for Hickory in the 60s. I think he may have been Canadian. He may have a daughter and a grandson who post in Youtube comments, which is pretty cool. I'd love to know more about Tommy Zang.

Discogs has three Tommy Zang 7"'s listed, and 45cat has five. Gemm and MusicStack have more for sale. Youtube has a few of his songs posted. But none of them have this particular record.

Zang was backed on these two songs by Frank Metis & His Orchestra. A little googling didn't uncover much about them either.

Praguefrank's Country Music Discographies is a cool site and it has this listed as Zang's first single, from '59. "White Silence" was written by one Frank Cavall, who is another mystery to me. The flip, "With the Good Lord Willing," was written by Zang himself.

Both are unusual and enjoyable. It's pop, it's orchestral, it's a little country, maybe? White Silence sounds like the theme song to Blazing Saddles, to me, anyway. This is some unique stuff. So enjoy it, Quieteers:

With the Good Lord Willing:

Another mystery is the label, Mark Records, outta Utica, New York. This rockabilly song was also released on Mark: