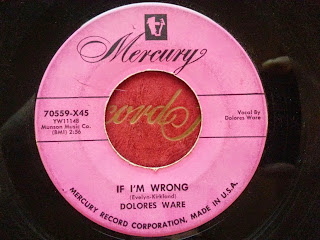 I found this in my dad's old 45 record album. From 1955 comes Dolores Ware's There's a Whole Lot of Fish In the Sea/If I'm Wrong (Mercury 70559). Both songs written by "Evelyn/Kirkland." I'm not sure who Evelyn is, but Kirkland is Leroy Kirkland, who had an incredible behind the scenes career as an "arranger, bandleader, guitarist and songwriter," per his Wikipedia article. Kirkland worked with a lot of cool people, I'll have to keep my eye out for his name from now on.

The Mercury Labels: the 1945-1956 Era by Michel Ruppli and ‎Ed Novitsky (Greenwood Press, 1993) says Is It True, I'm Through, Thrill-a-Dill and Sweetness were all recorded at Mercury Sound Studio in NYC on July 28, 1955. From the same source, she recorded Your Hurting Heart/Everything Will Be Alright, and For Once In Your Life/Can't Eat Can't Sleep with a guy named Lee Austin (real name Austin Cromer), at Universal Recording Studios in Chicago on April 7, 1955. And at Fine Recording Studios in NYC, on May 14, 1954, she recorded Just To Be With You (unissued)/My Heart's In the Right Place, and Tell Me Baby (Just What I Say)/I'm Selfish (both unissued). There may be more of her in that book but that's just what I came up with on the Google preview.

A Google search turns up little biographical information but she was mentioned in Billboard several times in 1955, in album reviews and ads for Wing Records. The Billboard review for Thrill-La-Dill is positive but here's the lukewarm Billboard review of There's A Whole Lot of Fish In the Sea/If I'm Wrong.

According to Marv Goldberg's R&B Notebooks page on the 5 Crowns, on November 13, 1955, Ware performed at Harlem's Rockland Palace Ballroom, along with the 5 Crowns, Ray Charles and the Moonglows, the Cadillacs, Charlie & Ray, and the New Yorkers Five. What a line-up.

Thrill-La-Dill has made it onto at least a couple of jump and "early ladies of rock" type compilations.

If the Dolores Ware mentioned in this 2011 Times-Picayune article is the same woman who recorded these songs, she was 76 in 2011 and was still active as an organist and music director for a concert at the New Orleans Jazz and Heritage Festival that year. That would put her born in 1935, and just 20 years old when she had her big year in 1955.

The A-side of my copy is scratched and jumps too much, but here's the excellent If I'm Wrong, an obscure gem of an R&B song if ever there was one:

So if you know more about Ms. Ware, I'd love to hear it. Leave a comment or drop me an e-mail. Here's all the Dolores Ware I could find on Youtube:

Everything Will Be Alright:

There's A Whole Lot of Fish In The Sea:

Here's that one from NYC's Sharon Records. Recorded before 1955? After? Not sure.