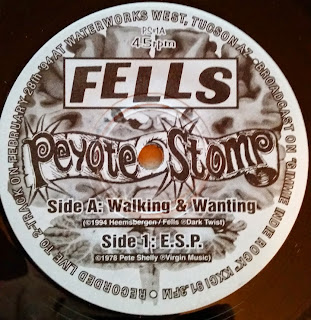 I have not posted a 45 in a while. On a recent CNQ Las Vegas junket, I picked up Fells' Walking & Wanting b/w their cover of The Buzzcock's E.S.P. for $5 at The Beat Coffeehouse. The Beat was a super-cool place; the food was excellent and they had a neat little record selection.

I'd never heard of this band before, the label just looked cool. I know we're at the point now where I can just look it up on my phone real quick, and I will do that if I'm on the fence about something. But if it looks too cool there in my hand like this one did I like to take my chances and don't bother looking it up until after I've bought it. Usually, like with this seven inch, I am pleased at the outcome of that adventurous gambit.

Looks like the band went by Fells and The Fells, but since Fells is what's on the label of this 45, I'll go with that for this post.

Back in 2009, this writer cat Jason Gelt wrote a good piece for examiner.com which reminisces about Fells as "Arizona's greatest garage band." Gelt mentions Walking and Wanting was his favorite Fells song.

Per Discogs, this was recorded live to 2-track on February 28th, 1994, at Waterworks West, Tucson Arizona, and broadcast on "Gimme Indie Rock" KXCI 91.3 FM. 500 of these seven inches were pressed.

In doing a little research on the band and their discography, I found some transcripts of an Austin fanzine called Geek Weekly that have been digitized. I'm not sure who the author is, but they mention Heath Heemsbergen, the lead singer, and Fells in a story about what otherwise sounds like a pretty righteous punk party if you're twenty in 1994:

"Then it all fell apart...and the Fells fucking went to hell in front of us all. It was insane nad (sic?) by the end no one was playing their own instruments or anything and people were getting on the stage and Heath was under a ladder in back of the stage nursing wounds."

In 1994 I was eighteen and I hitchhiked to a Lollapalooza with a hobo sign. It was different times back then. For me, anyway. This song is songs are copyright 1994, Heemsbergen and Fells: