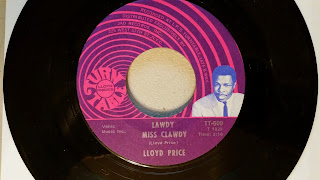 In April 1952 Specialty Records (who would release Little Richard's Tutti Fruitti three years later) released Lawdy Miss Clawdy. The single spent seven weeks at the number one spot on the Billboard R&B chart, and was named R&B Record of the Year by Billboard and Cashbox. It was written and sung by Lloyd Price (with Fats Domino on piano), was Price's first hit, and is a seminal piece of R&B and early rock'n'roll. Larry Williams (who had been Price's valet, per wikipedia), later reworked the song into Dizzy Mizz Lizzie. Lawdy Miss Clawdy has also been covered many times, but I think in my personal experience I've heard Dizzie Miss Lizzie more often.

Lloyd Price (born March 9, 1933) had more hits (Stagger Lee, Personality) and a long career in music and business. Price currently manages Icon Food Brands, which on top of Southern-style foods also features Lawdy Miss Clawdy clothing and collectibles. He's got a street named after him in his hometown of Kenner, Louisiana, and that city celebrates an annual Lloyd Price Day. He was inducted into the Rock and Roll Hall of Fame in 1998.

Per Wikipedia, he and his wife live in New York and he continues to sing.

There's a couple of different recordings of Price doing this song on Youtube, but none are as upbeat as the one that's on his Millennium Collection. I assume that one on the Millennium Collection is the original single, and the others are re-stylings, like this 1969 version I present tonight, along with its b-side.

This electrical soul version was recorded for his own label, Lloyd Price's Turntable. Per Discogs, he opened an identically named Manhattan restaurant-nightclub the same year he started the label. The label design is particularly groovy and features a picture of Price looking sharp. The B-side is another funky soul reworking of one of his older songs, the Luther Dixon-penned Little Volcano.

I didn't find either of these versions after my customary quick Google search. I picked this up over at Josey Records, for $3.

As always, this is presented strictly for educational and historical purposes, and will only be up for a limited time.

If the embedded player above doesn't work for you, try this: Lawdy Miss Clawdy (1969)

If the embedded player above doesn't work for you, try this: Little Volcano (1969)