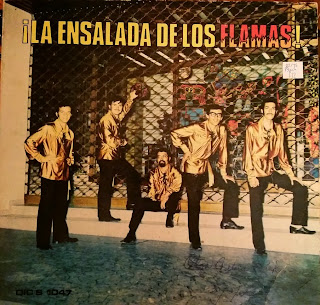 I picked up this LP, La Ensalada De Los Flamas, for $12 from Josey Records. It's a little scratchy but it plays through without skips, and both of my loyal readers know I like a little crackle and pop in my vinyl.

This was put out in 1971 by El Salvadorian label Dicesa. I'm not sure if Los Flamas is from El Salvador as well. I can't find any info on them via the internerts. All of side A is the title track. I had to look up Ensalada because I was like, "Salad of the Flames?" But other than meaning salad, Ensalada is a Spanish term for a music genre of songs that are a medley of upbeat melodies in various languages.

So the first side starts with a few Spanish songs, and they're really good. I'm not sure if the songs in Spanish were written by the band or not. About halfway through the band goes into these far-out ESL versions of Proud Mary, Banana Boat Song, and The Limbo Rock. The Limbo Rock ends with a wicked organ freak-out. Then it's back into some really rockin' Spanish-language songs.

The b-side begins with a couple of excellent garage-psych Latin songs, I think they're originals, but I'm not sure. Then there's a couple of more covers: Bruce Channel's 1961 Hey Baby -- Wikipedia says Delbert McClinton played harmonica on the original track -- and Jackie Trent's 1964 Only One Such As you.

And then it comes to this Zombies cover, the climax of the entire album. So many choices these guys made on this song, all so right, all so eternal:

If the embedded player above doesn't work for you: Ella No Esta Ahi